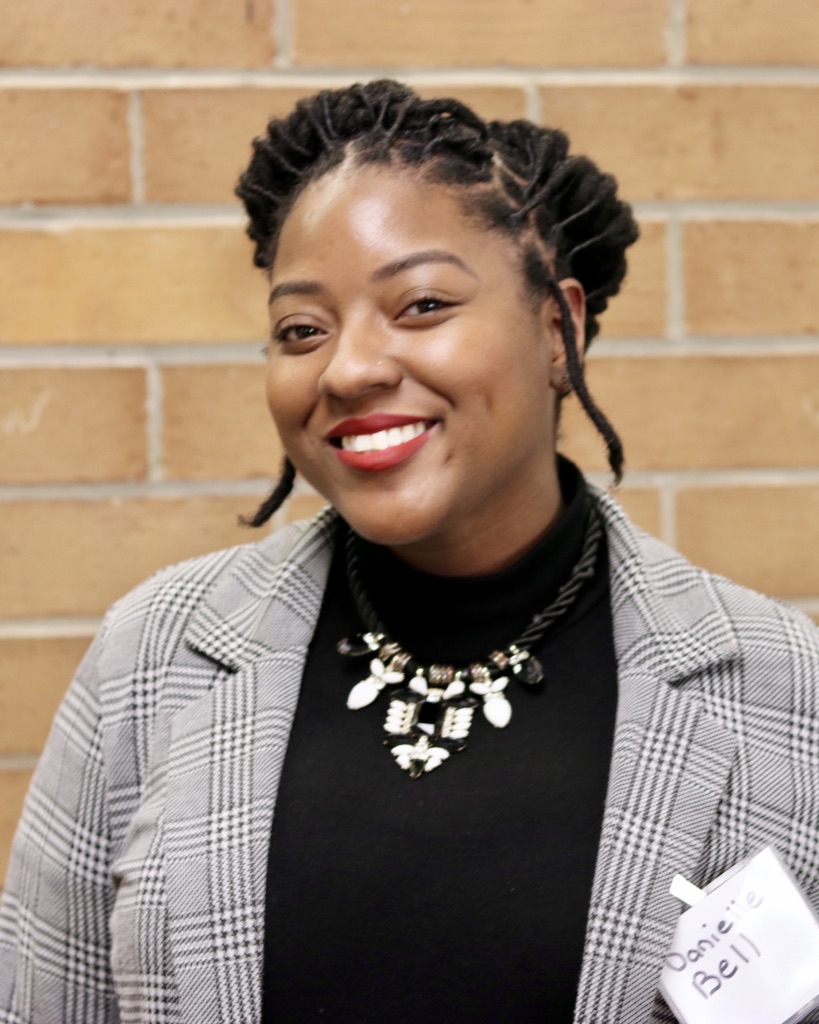 Danielle Bell earned a Bachelor of Arts in English with a minor in Telecommunications from the University of Maryland Eastern Shore. Danielle became a teacher through NC’s Lateral Entry Program and has taught middle grades English Language Arts. Danielle has coached Pep Squad, served on the School Improvement Team, and in her role as a journalism teacher, supervised the production of both the school newspaper and school yearbook. Danielle works closely with Student Activities to plan and host events such as school spelling bees, pep rallies, assemblies, galas, and award ceremonies. Danielle can be reached at debell3@ncsu.edu. 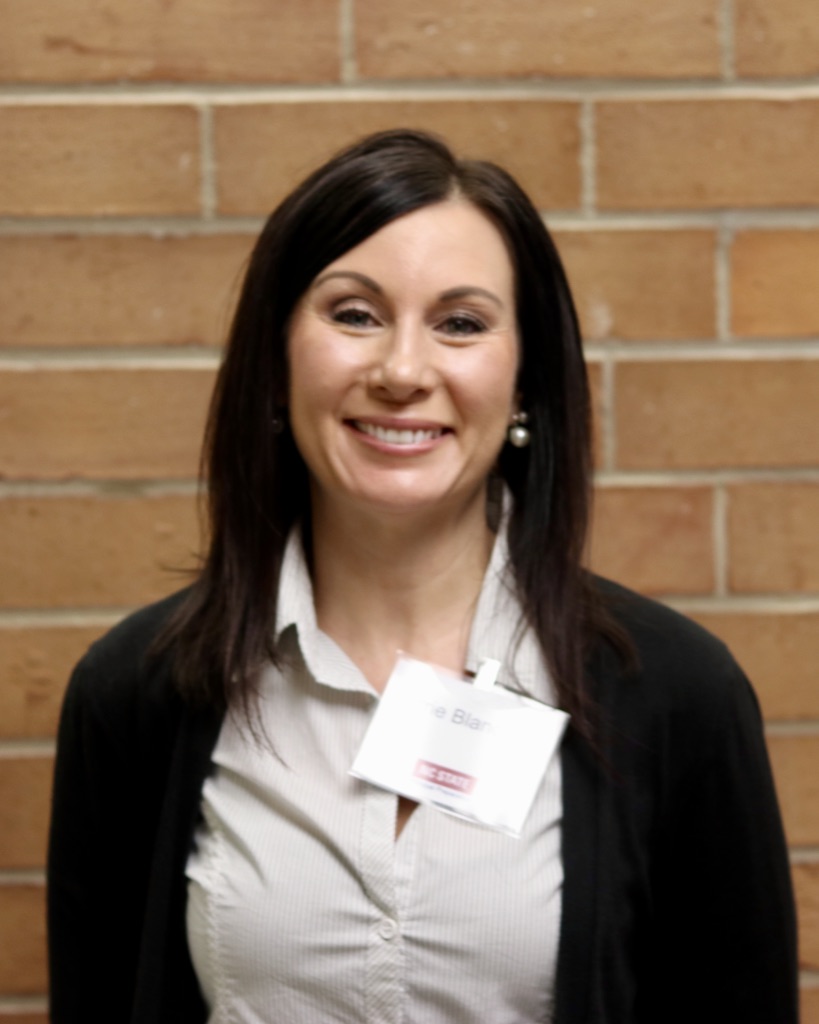 Carrie Blanchard earned an associate’s degree at Fayetteville Technical Community College and earned her bachelor’s degree at The University of North Carolina at Pembroke. Carrie started her teaching career as a Kindergarten teacher and is now teaching Pre-K at Alderman Road Elementary School in Fayetteville, NC. Carrie has served as grade chair and as the School Improvement Team Secretary, participated in the CARES mentoring program, served on the Academic Growth Professional Learning Community, and is an active member of the Parent Involvement Professional Learning Community. Carrie enjoys being a member of the Singapore Math Team at Alderman Road Elementary School where she helps teachers and students as well as provides professional development to her colleagues. Carrie can be reached at cablanch@ncsu.edu. 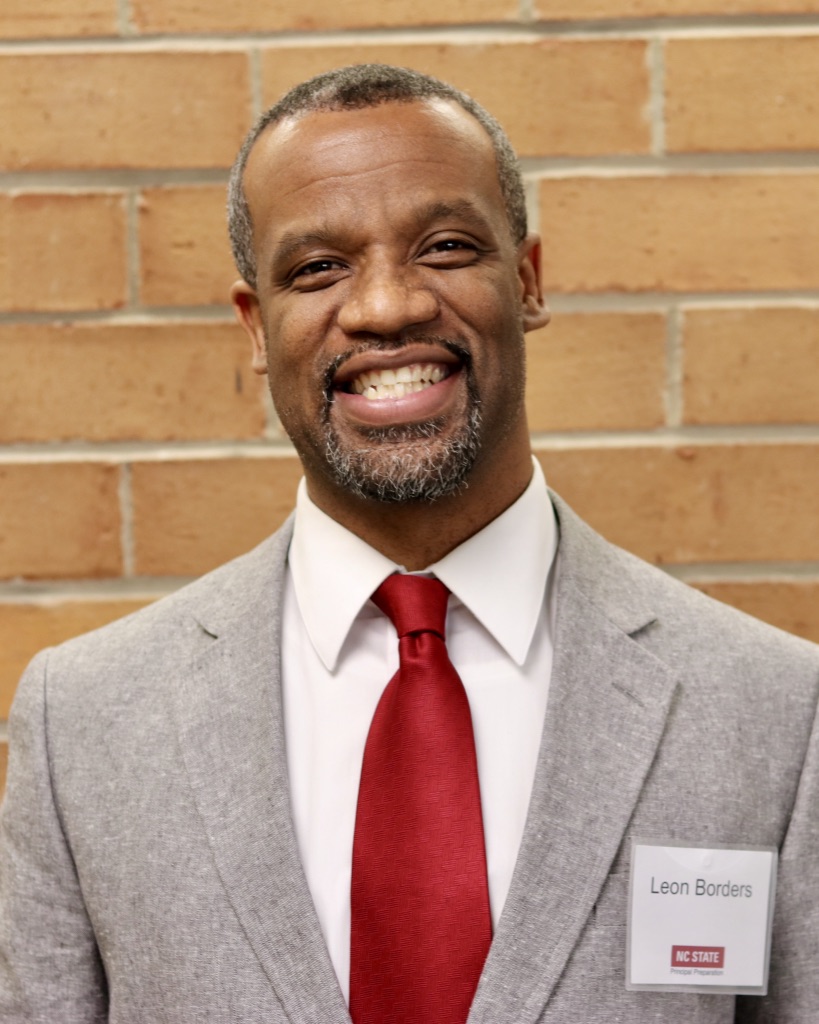 Leon Borders earned his undergraduate degree in Sociology from Fayetteville State University in 2009. He has served with Cumberland Schools in many capacities and has primarily worked with students with exceptionalities (Serious Emotional Disability and Mild Intellectual Disability populations). Leon piloted the Middle School Alternate Extension Education program. This program focuses on students who continue to struggle behaviorally despite multiple interventions provided in traditional and alternative school settings. Leon has served as Head Bowling Coach, Head Middle School Basketball Coach, Assistant Football Coach, Assistant Track Coach, and a member of the PBIS committee. He currently serves as the Exceptional Children’s Case Manager Chair for Cumberland County Schools. Leon can be reached at lborder@ncsu.edu. 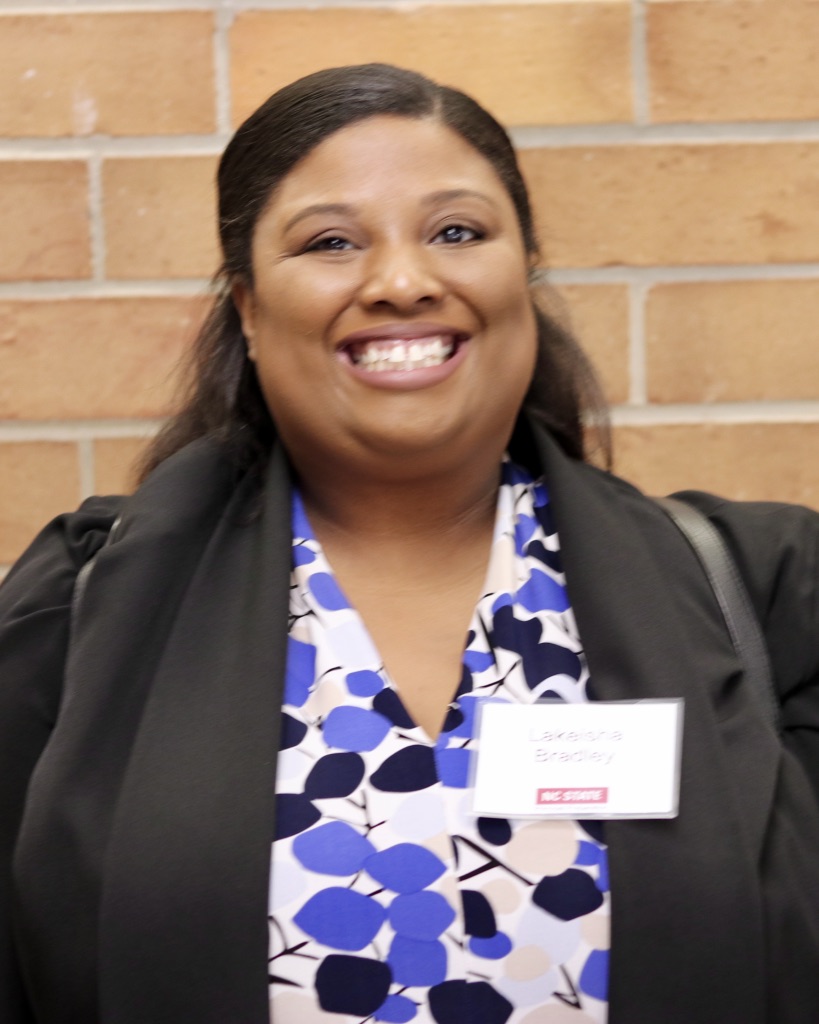 Lakeisha Bradley earned her Bachelor of Science degree from the University of Alabama in Biology with a concentration in Secondary Education. Lakeisha has taught secondary science in Cumberland County Schools for 10 years. She was an active member of the School Improvement Team for many years, as well as the School Improvement Team Chair for four years. Within her school, Lakeisha has served as HOSA Advisor, Yearbook Advisor, and Grants Committee Facilitator. As her school expanded from a health science concentration to a career and technical focus, she maintained a vital role as the Advisory Board Liaison to help implement career pathway opportunities with local leaders in the community and expand upon the development of the school’s new vision. Lakeisha’s passion for hands-on, real life applications in science has extended well beyond the classroom. Lakeisha taught both biology and earth science at Cumberland Polytechnic High School, formerly known as Howard Health & Life Sciences High School. She is now the lead instructor for the Teaching for Excellence in a Career in Health (TEACH) program at the Southern Area Regional Health Education Center and serves as a Math and Science teacher for Upward Bound at Fayetteville State University. Lakeisha can be reached at llbradle@ncsu.edu. 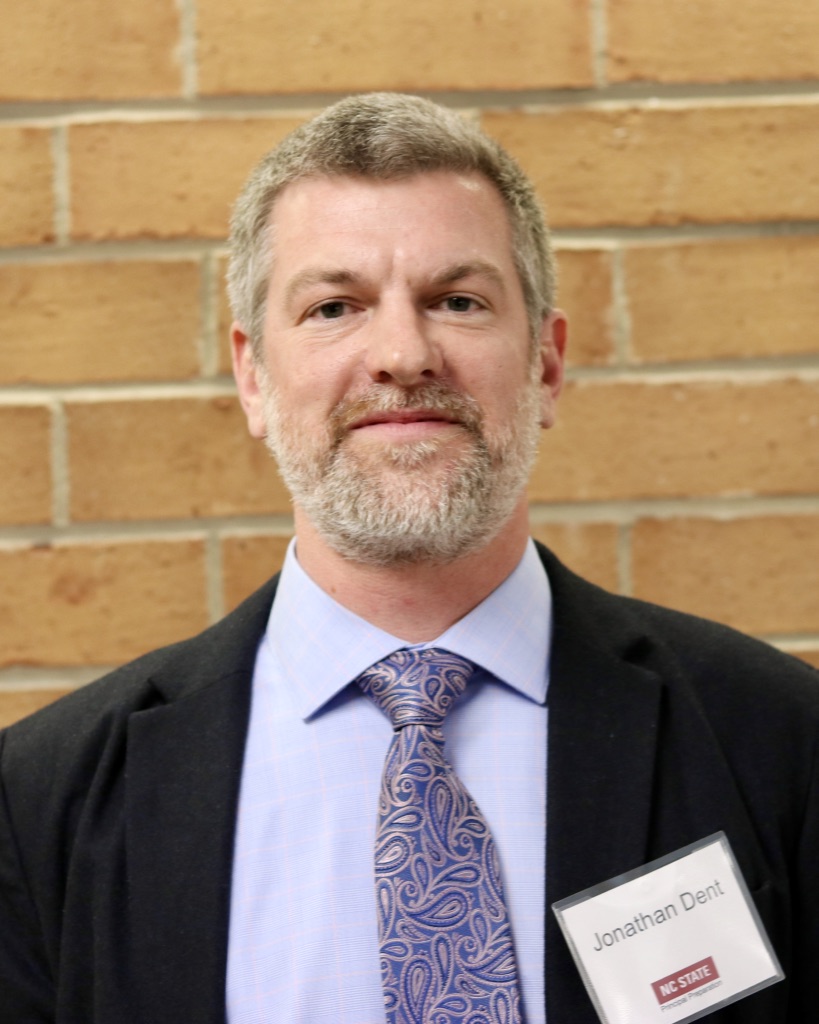 Jonathan Dent earned a Bachelor of Science degree in Exercise and Sport Science from the University of North Carolina at Greensboro in 2005. He has taught Physical Education and Health at Mac Williams Middle School for 15 years. He coached soccer at Mac Williams for 11 years and at Cape Fear High school for four years. Jonathan was the Mid South High School Boys Coach of the year in 2016 and was named the Fayetteville Observer Prep High School Coach of the year in 2017. He also coached wrestling for 12 years at Mac Williams. He is a National AIC coach as recognized by the NFHSA. Jonathan has helped to organize and present CCS professional development in Physical Education, served on the Super Fitness Field Day scoring/planning/judging committee, and serves as a Beginning Teacher Mentor at his school. Jonathan can be reached at jdent@ncsu.edu. 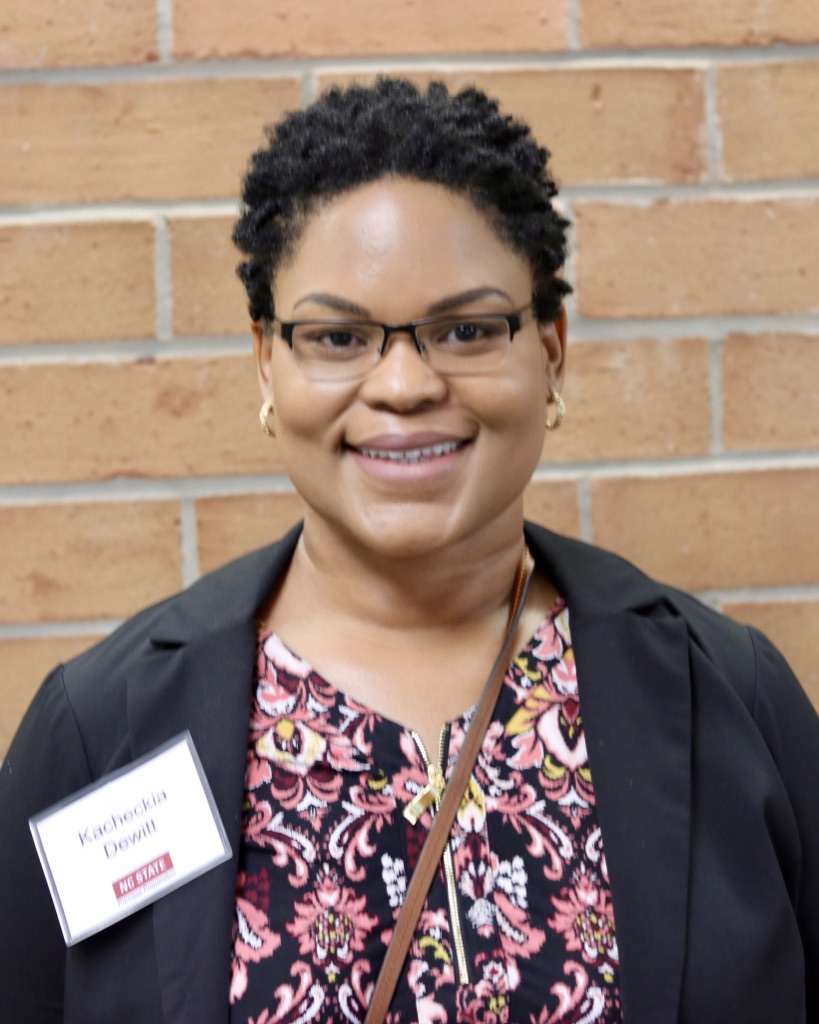 Kacheckia Dewitt earned a Bachelor of Science degree in Biology from Troy University. She is a lateral entry teacher and has taught Project Lead the Way Biomedical Sciences and Health Occupations courses at the Academy of Health Sciences and Technology at Westover High School since the beginning of her career. She has served as the school’s HOSA advisor, a beginning teacher mentor, and interim Director of the Academy of Health Sciences and Technology. Kacheckia remains active throughout the community and state as the Sandhills Region HOSA Advisor and the Chair-Elect of NC HOSA. In her free time, she enjoys sharing STEM learning opportunities at schools and programs in Cumberland County that may not have access to transformative learning opportunities. She has taught forensics and biomedical science using STEM activities for the Southern Regional Area Health Education Center in Fayetteville, NC and 21st Century Community Learning Centers at Fayetteville State University and Douglas Byrd High School. Kacheckia can be reached at ksdewitt@ncsu.edu . 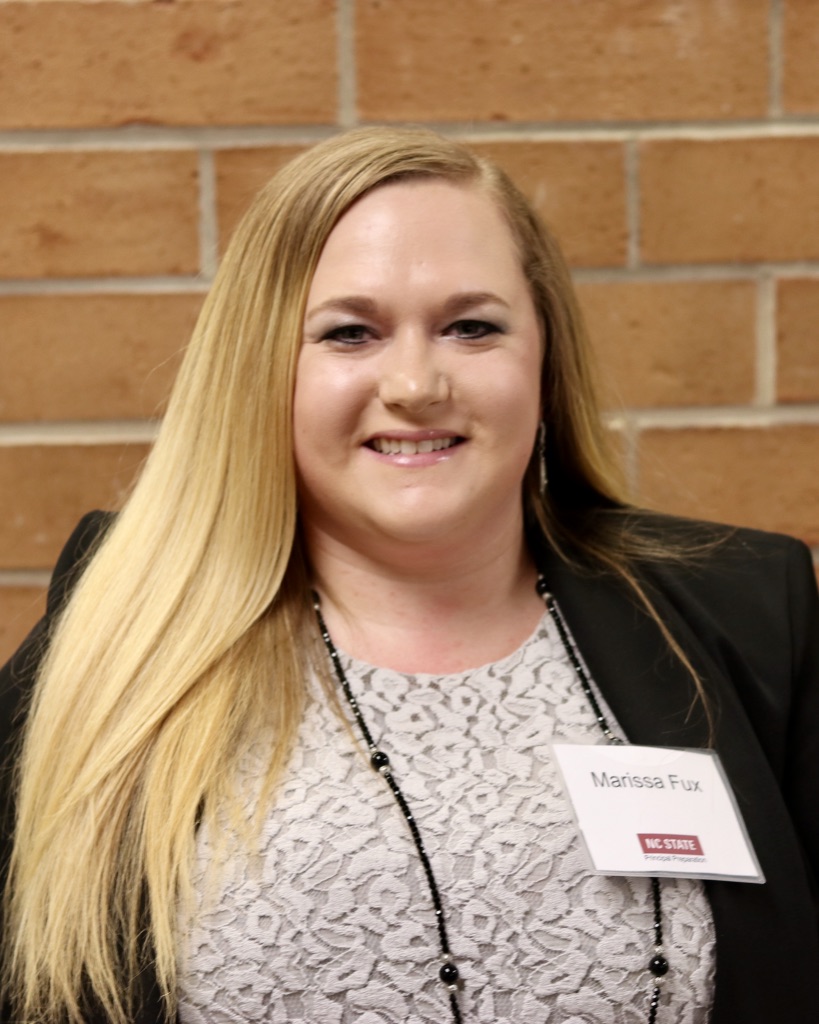 Marissa Fux earned her undergraduate degree in Special Education with a concentration in reading from the University of North Carolina at Pembroke. Marissa has worked as a special education teacher in Cumberland County Schools. Currently she is an Exceptional Children’s Case Manager for two elementary schools and one high school in Cumberland County Schools. Marissa was named the 2019-2020 Teacher of the Year for South View Middle School. She has been involved in community outreach and has served as a School Improvement Team member, broadcasting advisor, pep squad coach, mentor for beginning teachers, PBIS team member, yearbook advisor, and picture day coordinator. Marissa can be reached at mlfux@ncsu.edu . 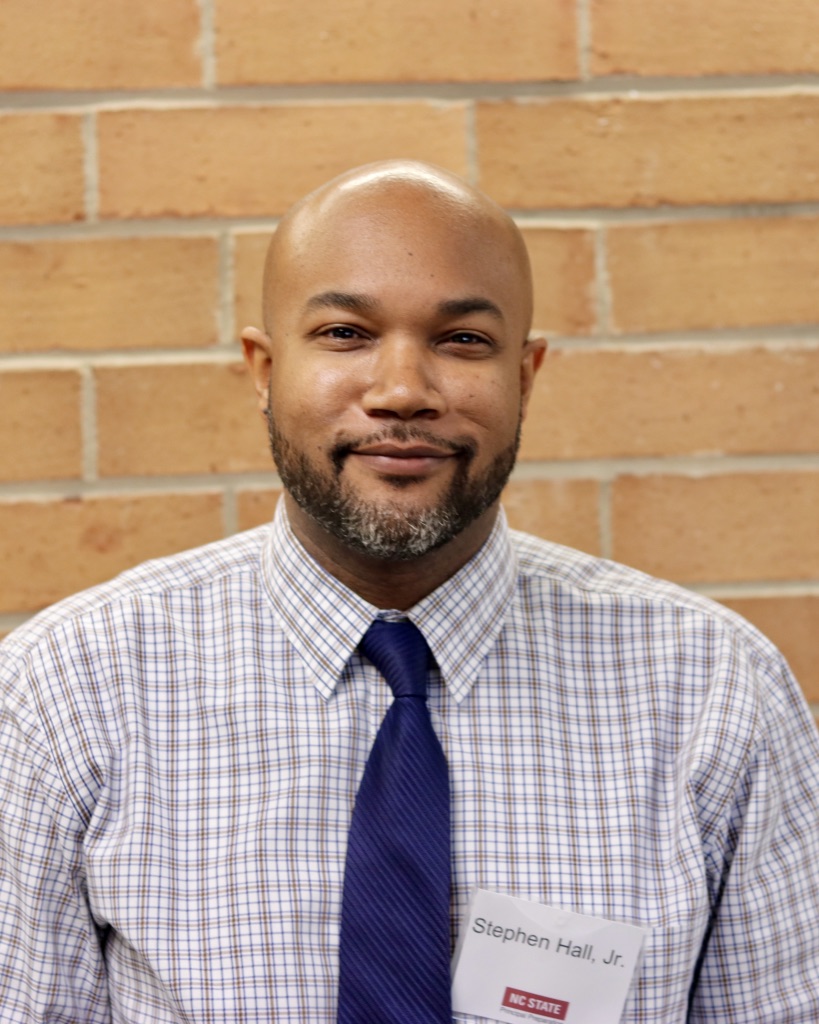 Stephen Hall, Jr. earned a Bachelor of Science Degree from Fayetteville State University. In his 19 year career he has served as a grade level chair (4 times), SIT chairperson, a Science Olympiad coach (4 years), an ILT mentor, and began a student council. He has taught second through fifth grades and is presently a fourth grade Reading and Social Studies teacher at New Century International Elementary School. Stephen can be reached at: sahall22@ncsu.edu . 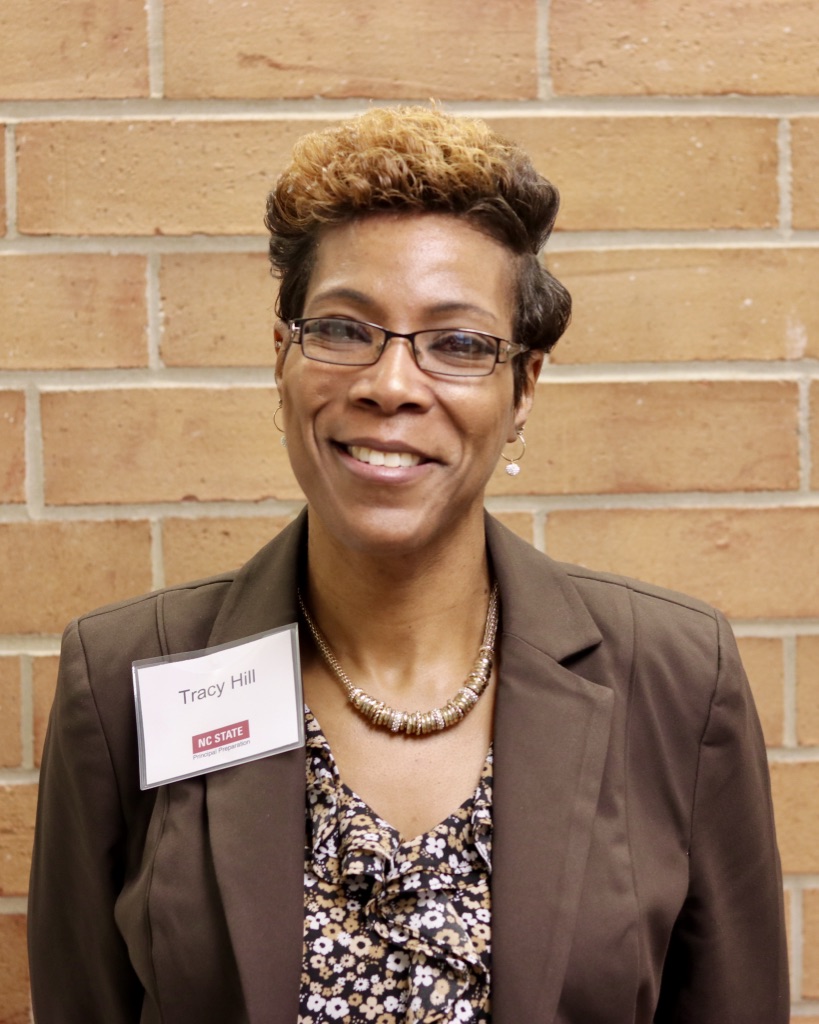 Tracy Hill earned her Bachelor of Science in Criminal Justice from American Intercontinental University, where she graduated Summa Cum Laude. She has worked for Cumberland County Schools for 21 years, 15 years as Bookkeeper/Salary Analyst, and seven years as a teacher. Tracy has been recognized each year with certificates of achievement for student’s proficiency reaching above 95%. Tracy has been recognized as a Teachers at Work Program recipient, DBHS Teacher of the Year, as well as National Academy Foundation World Teacher Day Recognition recipient. Additionally, her most recent accomplishment includes recognition as the runner-up for Cumberland County Teacher of the Year. She serves as a teacher mentor, is a former Guardian ad Litem with Cumberland County Court System, and volunteers as a youth mentor. Tracy is currently the Director of the Academy of Finance at Douglas Byrd High School in Cumberland County. Tracy can be reached at: tghill2@ncsu.edu . 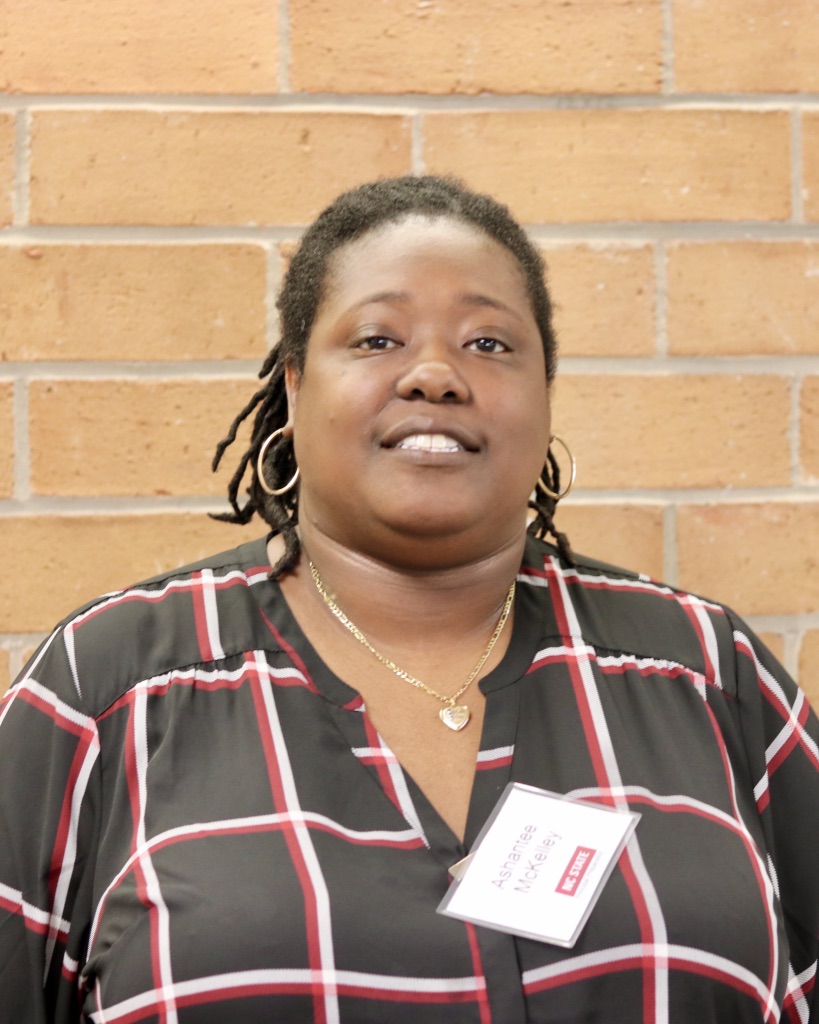 Ashantee McKelley earned a Bachelor of Science degree in Elementary Education from Fayetteville State University. She teaches fourth grade and is the grade-level chair at Warrenwood Elementary. She was Warrenwood Elementary Teacher of the Year for the 2014-2015 school year. Ashantee has served as a Science Olympiad Coach, Beginning Teacher Mentor, and Teacher Candidate Mentor. She is a member of the School Improvement Team, Academically or Intellectually Gifted Needs Determination Team, and Home-School Relations Team. Ashantee can be reached at: admckell@ncsu.edu . 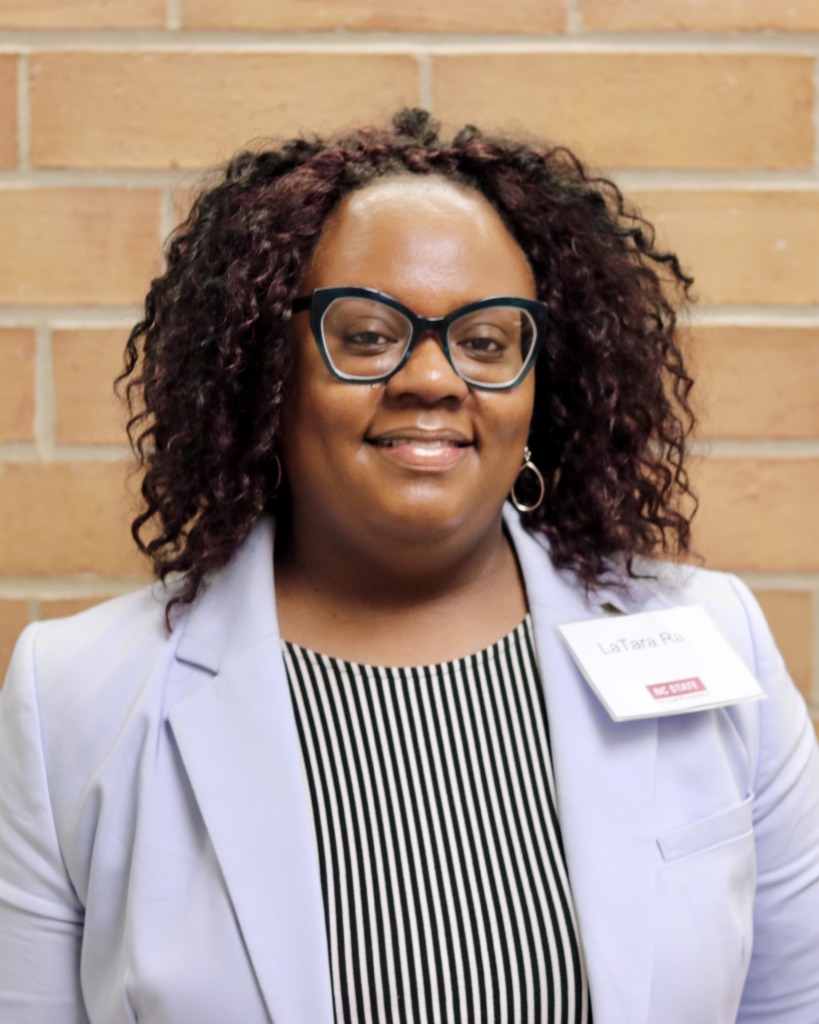 LaTara Ray earned a master’s degree in Business Management and Leadership from Liberty University and a bachelor’s degree in Sociology from Fayetteville State University. Through NC State University, she also completed her teaching requirements in the Business and Marketing Education Professional Licensure Program. Currently, she teaches Computer Science Discoveries III, Introduction to Office Productivity and Keyboarding & Digital Literacy to all grades at the middle level. Previously, she was an Academy of Finance High School Teacher where she taught Entrepreneurship I, Multimedia & Web Page Design and Microsoft Word & PowerPoint courses. While there, she served as a member of the PBIS Committee, FBLA Co-Adviser, Key Club Adviser and Alpha Omega Rho Honor/Service Girl’s Sorority Co-Adviser. She is a graduate of the Cumberland County Institute for Community Leadership Program. LaTara can be reached at : lyray2@ncsu.edu . 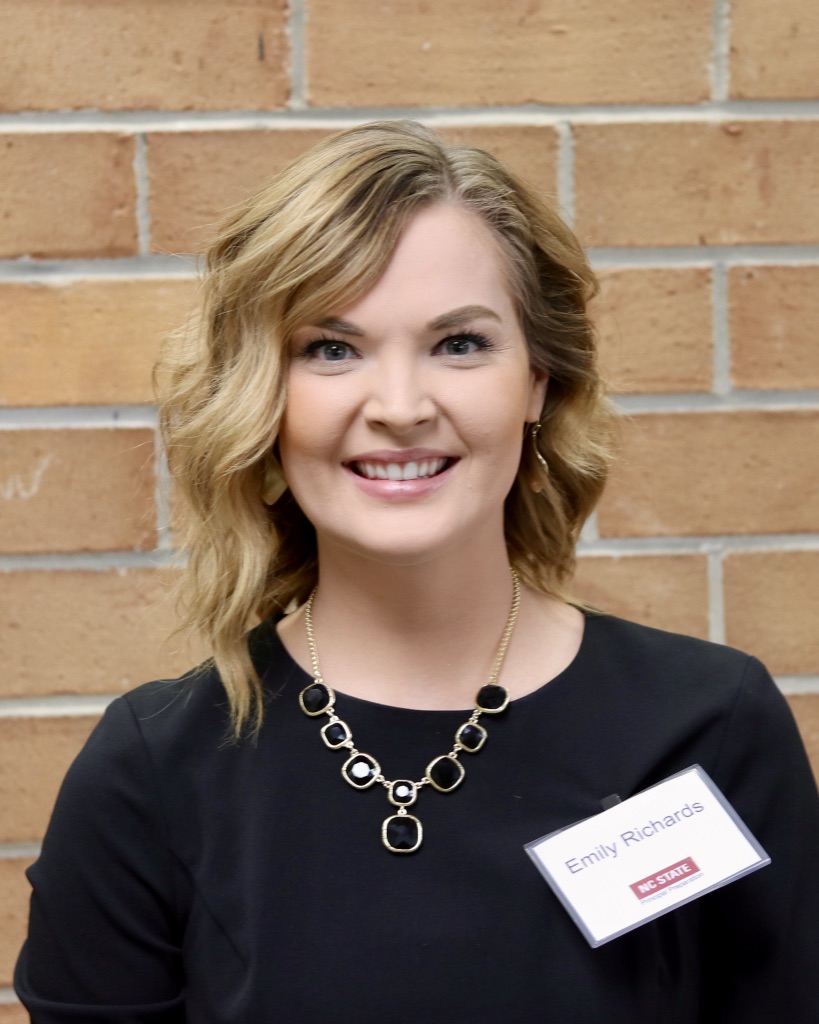 Emily Richards earned her undergraduate degree in Middle Grades ELA with a concentration in K-12 Special Education (Mild-Moderate) from Fayetteville State University in 2014. Following her graduation, she began her teaching career in Cumberland County Schools as a 7th Grade ELA teacher at Gray’s Creek Middle School where she earned many honors and held leadership responsibilities such as Grade Level Chair. In 2016, she returned to Fayetteville State University where she earned her master’s degree in Reading Education. In 2017 she began teaching 3rd grade at Long Hill Elementary School in Cumberland County. Emily served as Long Hill’s Teacher of the Year in 2018-2019, moving forward to win Pine Forest District’s Teacher of the Year and finishing as 2nd Runner-up Cumberland County Teacher of the Year for 2018-2019. She represented the teachers in Cumberland County on their Strategic Planning Committee Team where she helped compose Cumberland County’s new Strategic Plan and is currently serving on the Premier Professionals Committee. Emily is also her school’s Student Involvement Correlate Chair as well as Grade Level Chair for third grade. Emily can be reached at : erricha2@ncsu.edu . 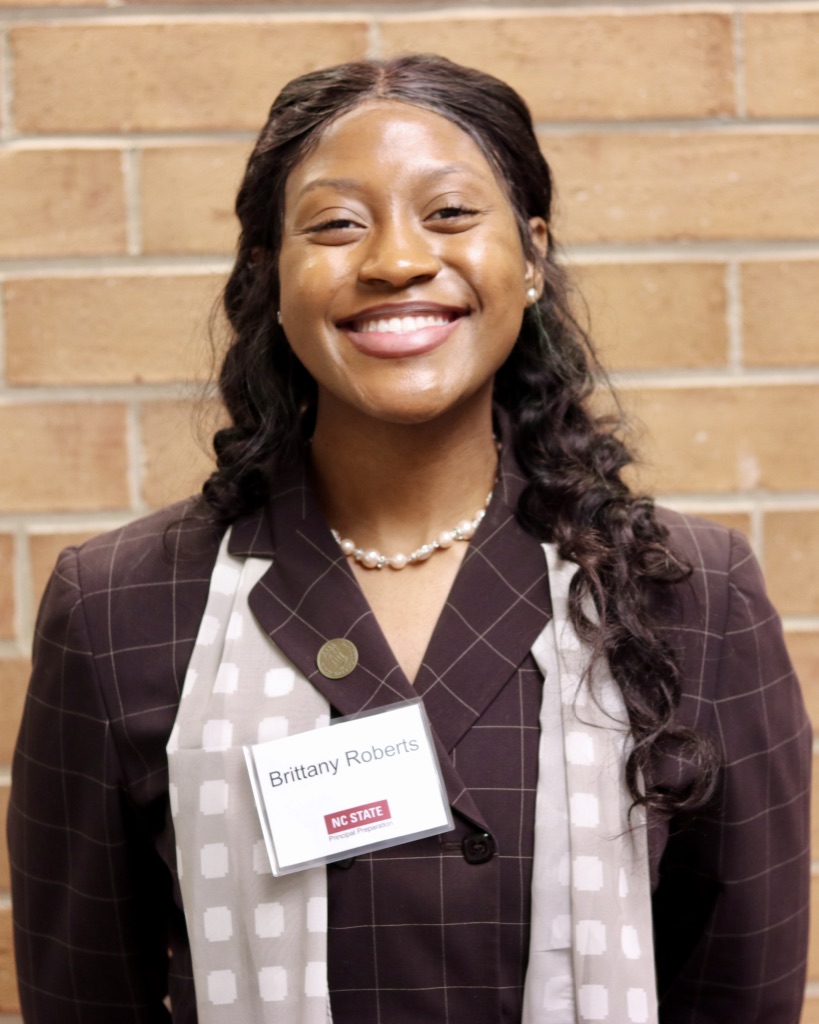 Brittany Roberts received a Bachelor of Science in Exercise Sport Physiology and graduated with honors from the University of North Carolina Pembroke. She also earned a master’s degree in K-12 Physical Education and Health with a minor in Sport Administration from the University of North Carolina Pembroke. Brittany is an Ella Baker Trainer for Children Defense Fund Freedom Schools where she provides training for college students on how to teach Integrated Reading Curriculum to K-12 students. She is a Teach for America South Carolina Alumni member. At Walker Spivey Elementary School, she is the Physical Education teacher, PBIS chair, and SIT committee member. Brittany is also head coach for South View High School soccer team. Brittany can be reached at: brobert5@ncsu.edu . 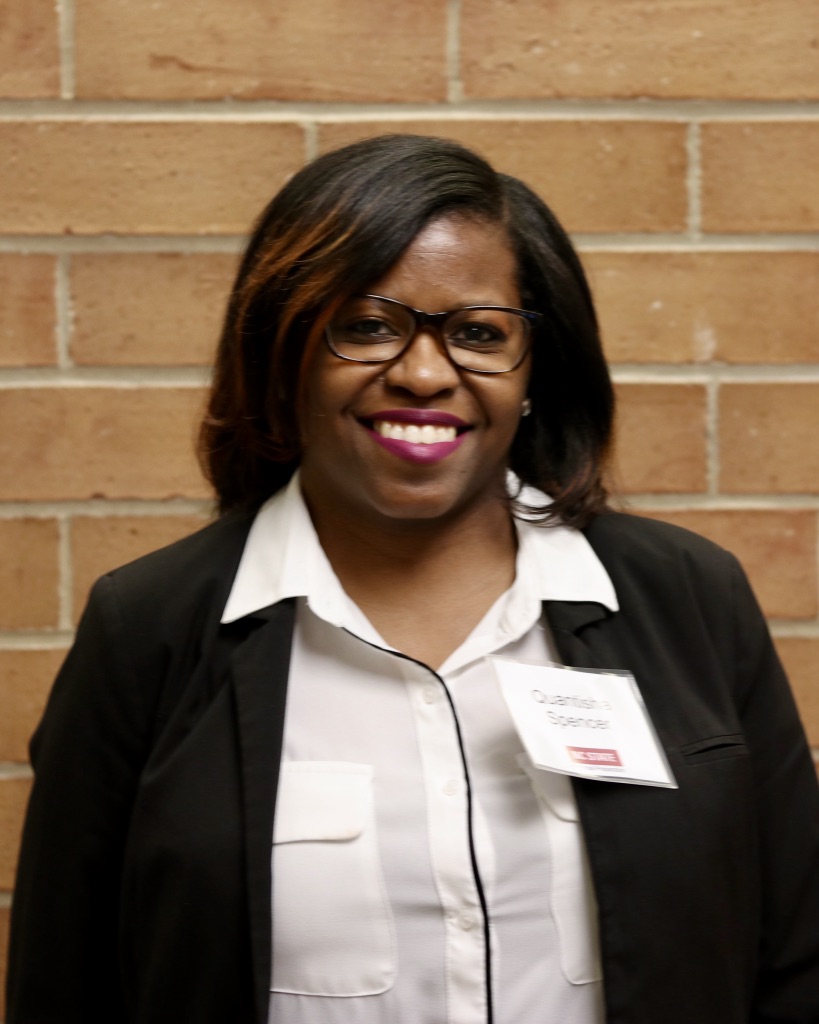 Quantisha Spencer earned a Bachelor of Science degree in Elementary Education from Fayetteville State University. She began her teaching career with Cumberland County Schools in 2010 where she taught third and fourth grade. Quantisha currently serves as an Instructional Coach at Howard Hall Elementary School in Fayetteville, NC. She has facilitated several professional development workshops for teachers and other coaches in the district. Additionally, Quantisha serves as a member of the Instructional Leadership Team, Chair of the School Improvement Team, Back-up Testing Coordinator, and is a mentor to beginning teachers. She also serves as a member of Cumberland County School’s Math Advisory Team. Quantisha can be reached at: qmspence@ncsu.edu . 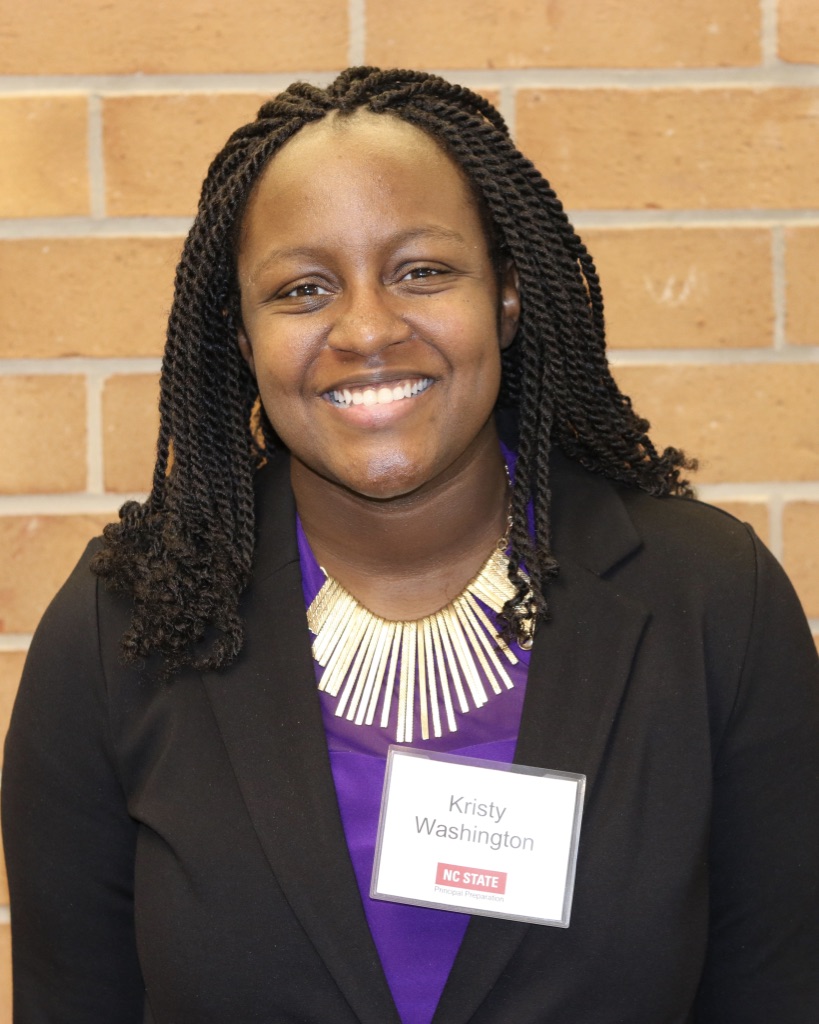 Kristy Washington earned her Bachelor of Science Degree in Mathematics from Fayetteville State University in 2011. She earned her Master of Arts in Mathematics from Wake Forest University in 2013 and her Master of Arts in Curriculum and Instruction from Gardner Webb University in 2018. Kristy has served on the curriculum writing team for Cumberland County since 2011 where she develops curriculum materials and provides lessons for teachers in the county to follow. Kristy is also on the Equity-Focused Classroom Management Team where she creates and facilitates on-going professional development to help other teachers in the county understand, use, and implement equity in their classrooms. Kristy is currently a Mathematics Teacher at Westover High School where she teaches Math 1. Kristy can be reached at: kmmitch3@ncsu.edu .